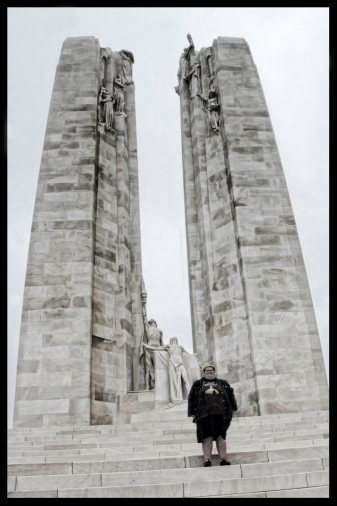 In August of 2010, while I was on a trip to England, I decided to make a small skip over to France to visit the memorial of my Great Grand Uncle Rifleman Tom Hartley (The King's Liverpool Regiment) who was KIA at the Battle of Cambrai November 30, 1917.

Not realizing the proximity, driving from Calais to Cambrai, along the motorway, I caught glimpse of the top of the pylons behind some trees off the side of the highway.  I knew instantly that it was the Vimy Memorial.  I made the decision on the spot to stop there on my way back to Calais. It was one of the most poignant decisions I have ever made and also the most humbling.

It was a steady rainy and windy day, cold and dreary and I think it had made the experience more powerful and haunting.  I can not describe the immense pride I felt as a Canadian and as a descendant and relative of many brave Canadian, British and American soldiers who served and some ultimately were killed for King and Country and the preservation of freedom and battle against terrorism and tyranny.

The monument itself is breathtaking in its size and its craftsmanship.  Its sheer size is overwhelming in its ability to humble you to the bone.  I for one was glad it was raining, so my tears could blend in with the raindrops.

The preserved battlefield gave me goosebumps, and even today, as I think about it, I get the same effect.  I could not even fathom the conditions, the sights, sounds, smells and sheer terror all those young lads experienced.

I have always been a proud supporter of the Canadian Military, our role in the wars, how it shaped our nation. As a citizen and as a Grand Daughter, Niece and Cousin to Canadian, British and American soldiers I say with all my heart "THANK YOU" and "I WILL NEVER FORGET".