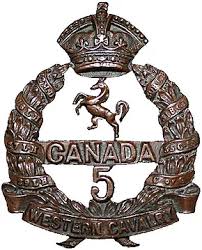 The 1st Battalion, Saskatoon Light Infantry (MG) has the great
honour of perpetuating the 5th Battalion C.E.F. The Battle Honours carried on its Colours were won by that great battalion of the First World War. Here follows a very condensed account of that famous battalion.

All of Canada's battalions of the First World War had numerical titles. Among these was the 5th Bn. C.E.F. It was to this battalion that the Saskatoon militia unit, the 105th Regiment "Fusiliers" (Saskatoon) made its largest contribution. After training at Valcartier, the battalion embarked on the S.S. Lapland at Quebec and sailed with the convoy of thirty transports with naval escort from Gaspe on 3rd October 1914. It arrived at Plymouth on the 14th October and disembarked at Devonmouth on the 20th October. The winter  of 1914-15 was spent in training on Salisbury Plain, Wiltshire, where the Canadian Division (later the 1st Canadian Division) was organized.

During this period 5,818 other ranks passed through the Battalion.
Battle casualties were very heavy and were:

Commanding officers of the Battalion during the First Great War were:

After the Armistice the Battalion marched to Germany, and then on 15th March, 1919, embarked at Havre for England, arriving at Weymouth the following day. On 10th April, the Battalion em-barked on the S.S. Carmania at Liverpool and eight days later disembarked at Halifax, N.S. Demobilization of the 5th Bn. was carried out at Regina on the 24th of April, 1919. The Colours of the 5th Bn. are deposited in Christ Church, Saskatoon.
​
With the outbreak of the Great War in 1914, Lt. Col. Tuxford approached Col Steele and requested that a mounted contingent, under Tuxford's command, be sent overseas. Unfortunately for Tuxford, another cavalry regiment had already been chosen for this task. However, seizing the initiative, Tuxford made a request to form a dismounted contingent.
Tuxford wrote:". . . I, therefore, got Colonel Steele to wire in to Ottawa and ask for permission for the mounted units from the West to come down to Valcartier as dismounted troops, if they so desired . . . Upon application I was authorised to organize the two battalions."
"In the one battalion I placed the 12th, 16th, 27th, 29th, 30th, 31st, 35th (Light Horse) and Corps of Guides. This battalion became the 5th Canadian Infantry Battalion, and later on being asked to select a name for the battalion, I could think of no better than that of Western Cavalry, and as such they remained the 5th Battalion, Western Cavalry." 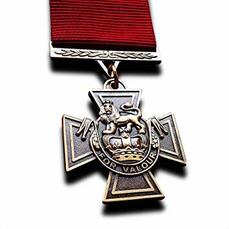 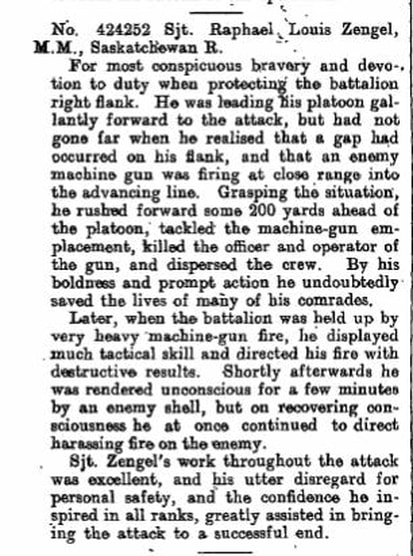 Raphael Louis Zengel (1894-1977) was born on 11th November 1894 in Faribault, Minnesota, United States. While he was still very young, he and his mother, Mary, moved from the United States to a homestead in Plunkett, Saskatchewan, Canada. Zengel enlisted in the Canadian Expeditionary Force (CEF) in December 1914. He served overseas with the 5th Infantry Battalion, CEF, taking part in several raids on German trenches. For his role in one of these raids, near Passchendaele in Belgium in 1917, Zengel received the Military Medal.

On 9th August 1918, Sergeant Zengel was leading his platoon forward during the second day of the massive Allied offensive against the German lines around Amiens, in France. When he noticed a gap on the flank of his platoon and an enemy machine gun firing on the advancing Canadians at close range, he quickly decided to deal with the machine gun position himself. Rushing 200 metres ahead of his platoon, Zengel charged the German emplacement, killing two of the machine gun’s crew and compelling the rest to flee. Later that day, when the progress of the 5th Battalion was blocked by heavy machine gun fire, he demonstrated great tactical skill in directing the fire of his platoon to eliminate the enemy resistance. Sergeant Zengel’s courage, leadership and disregard for his own safety inspired his men, and were important factors in enabling the advance to continue. For his conduct on this day, he was awarded the Victoria Cross.

The VC was gazetted on 27th September 1918, and after the war, Zengel lived in Calgary, Alberta, where he joined the Calgary Fire Department in 1919 and served until 1927. In 1936, the government of Canada chose to name a lake in northeastern Saskatchewan in Zengel's honour. Inexplicably, the feature became Zengle Lake, and so it remains today. In 1951, one of the mountains of the Victoria Cross Range, in Jasper National Park, was named in his honour. Mount Zengel is visible from Highway 16, east of Jasper, Alberta.
Sergeant Zengel spent most of the rest of his life in the town Rocky Mountain House, Alberta, where the local branch of the Royal Canadian Legion has been named in his honour. He died in Vancouver, British Columbia on 27th February 1977, and after his body was returned to Alberta, he was buried in Pine Grove Cemetery, Rocky Mountain House. He donated his Victoria Cross to the Rocky Mountain House Legion where it is kept in a safety box, and only a replica of his Victoria Cross along with the rest of his medals are on display. 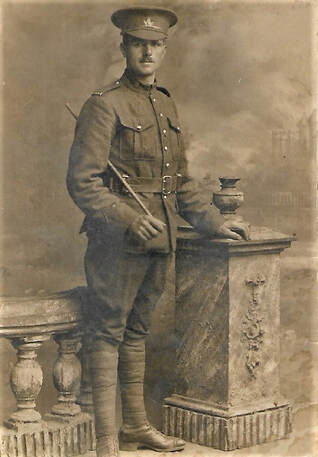 Corporal Omer Bélanger MM and Bar 198952 of the 5th Canadian Infantry Battalion (Western Cavalry). In the span of six weeks during Canada’s Last Hundred Days, Corporal Bélanger’s actions twice merit the Military Medal for acts of gallantry and devotion to duty under fire. Omer one of the most unheralded members of the CEF in the Great War. 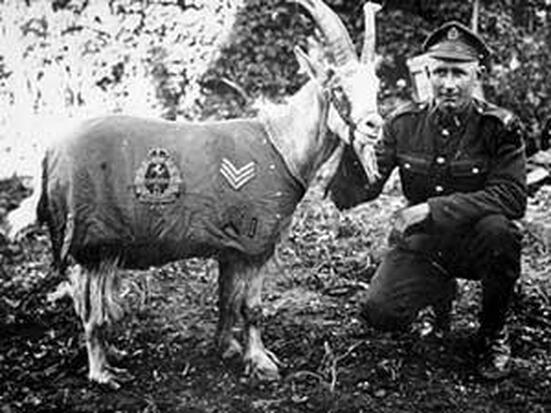 Sgt. Bill was court martialled several times, once for eating the battalion personnel roll. (Veterans Affairs Canada)
​On August 23, 1914, a train carrying soldiers of the newly mustered 5th Western Cavalry Expeditionary Force stopped at Broadview, Saskatchewan, Canada, where a group of recruits spied young Daisy Curwain and her cart goat, Bill. They asked Daisy if they could have her goat as their good luck mascot, and she agreed.
Private Bill proceeded with his new family to Valcartier training camp and thence overseas to England. After long, arduous months of training, the unit received their orders to proceed to the front. However, no regimental pets would be allowed to go along.
The men of the 5th had other ideas. According to Sergeant Harold Baldwin, who penned Holding the Line (Chicago: A. C. McClurg & Son, 1919) from the front, “We could not part with Billy; the boys argued that we could easily get another colonel, but it was too far to the Rocky Mountains to get another goat. The difficulty was solved by buying a huge crate of oranges from a woman who was doing brisk trade with the boys. The oranges sold like hot cakes and in a jiffy the orange box was converted into a crate and Billy [was] shanghaied into the crate and smuggled aboard the train.”
Bill’s life in the trenches was an exciting one; he was known for his fondness for canteen beer and his propensity to eat important papers left lying around. However, Bill subsequently redeemed himself in battle, earning the rank of sergeant. At Ypres he was found in a shell crater standing over a nervous Prussian guardsman, even though Bill himself had been wounded by shrapnel; at the Second Battle of Ypres he was gassed along with his boys but survived. He fought at Vimy Ridge, was shell shocked at Hill 70, and was wounded twice at Festubert, where he became a hero by knocking three soldiers into a trench seconds before a shell burst precisely where they had been standing.
By war’s end he was one of the few original soldiers of the 5th still active and the only original mascot to enter Mons on Armistice Day. For his valor he was awarded the 1914/1915 Star, the British War Medal, and the Victory Medal for his four and a half years’ service. Sergeant Bill accompanied his men to Berlin at war’s end and marched in the grand Victory Europe parade wearing an embroidered blue plush coat emblazoned with sergeant’s stripes.
Despite immigration problems, Bill returned to Saskatchewan with his unit, where it was demobilized on April 24, 1919. He was later returned to Miss Curwain in Winnipeg and lived several more years. After his death Bill was stuffed and mounted and displayed in the Saskatchewan Legislative Building. His body was eventually returned to Broadview, where he still holds a place of honor in the Broadview Museum. 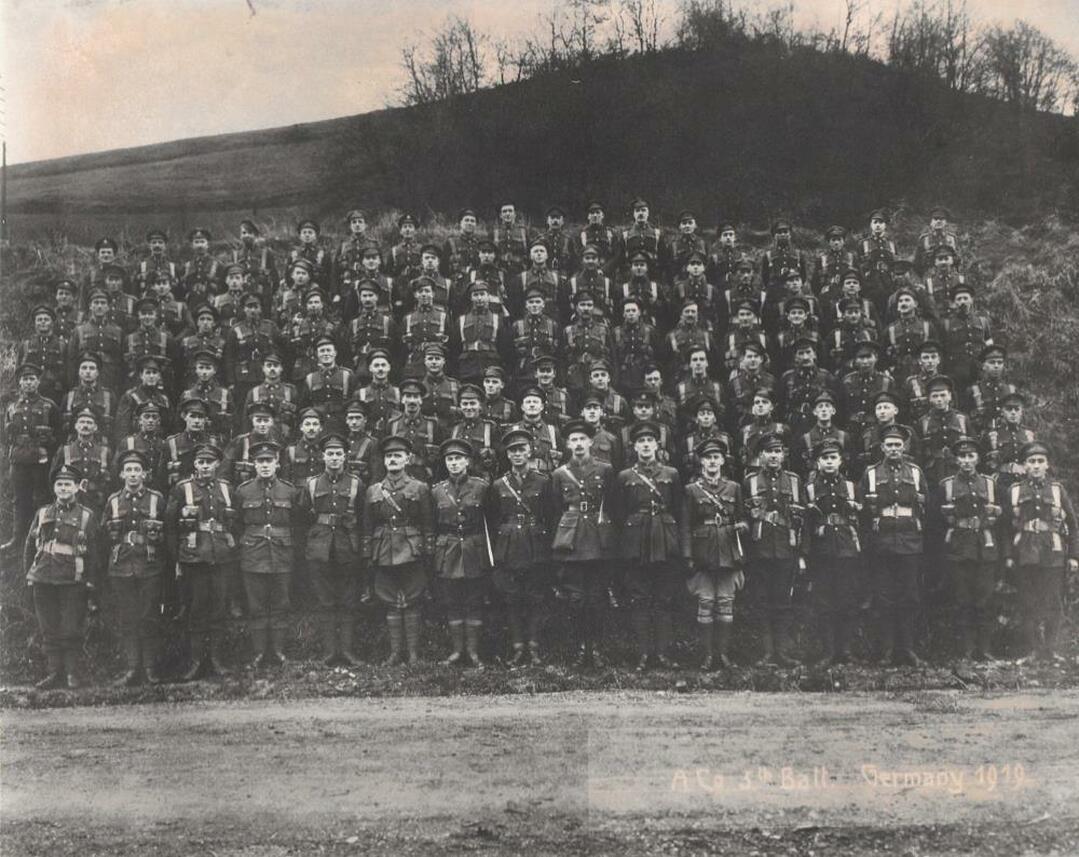 A Company 5th Battalion, in Army of Occupation - Germany January 1919.
On February 4, 1919 about 100 members from the Battalion were transported to Liege, Belgium to take part in a General Review of the Canadian Corps by the Commander of the Belgian Army, General Jocques and Lt. General Sir A. W. Currie, Commander of the Canadian Corps. The 5th Battalion (Western Cavalry) led by their mascot "Sergeant Bill", were given the honour of leading the whole of the infantry of the 1st Division. 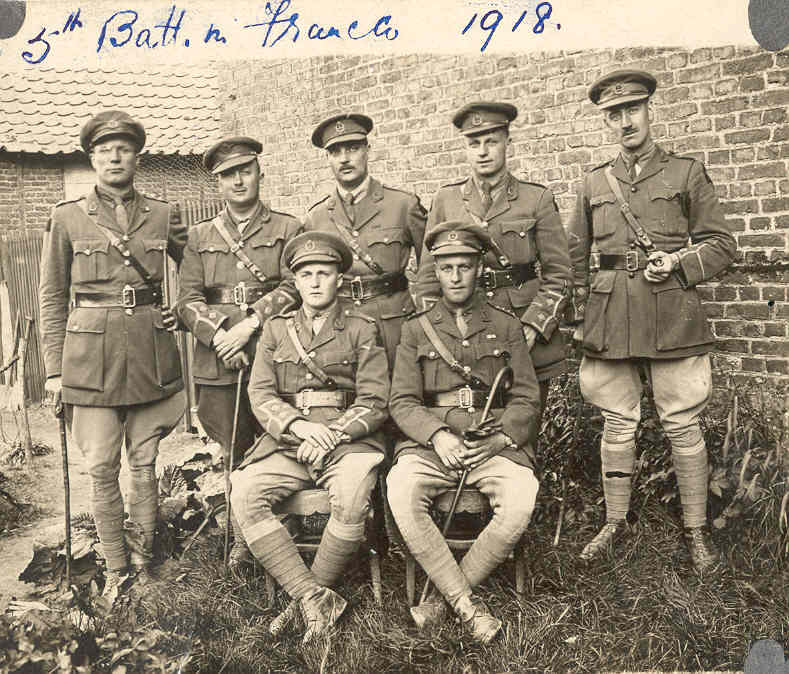 Officers of the 5th Battalion, Western Cavalry, near the Belgian Border - November 1918 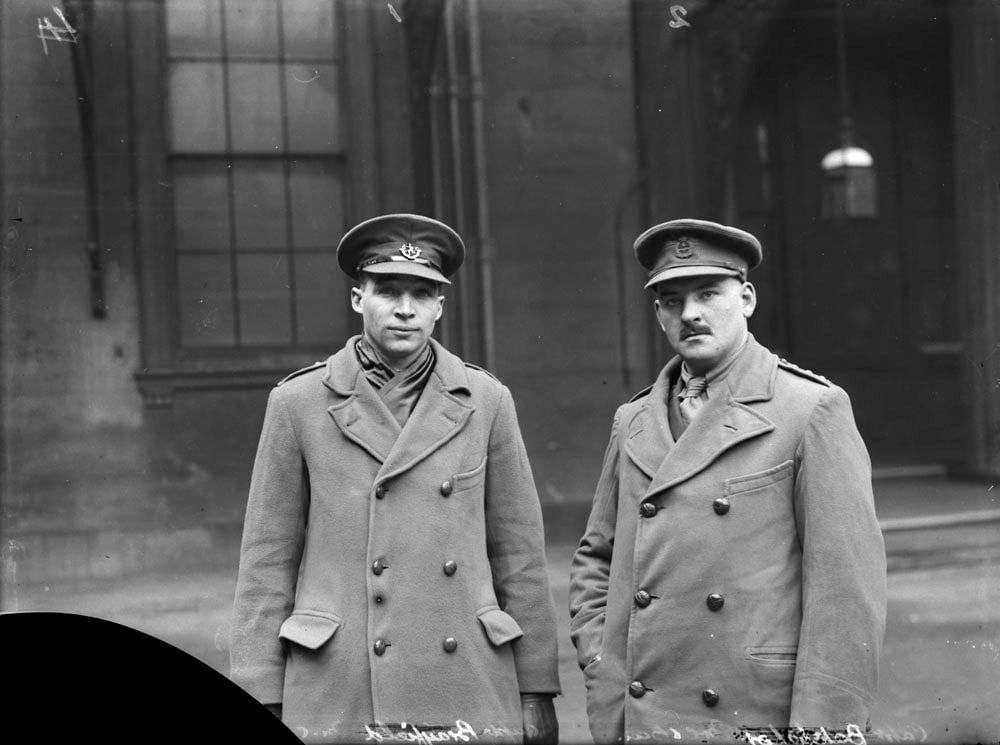 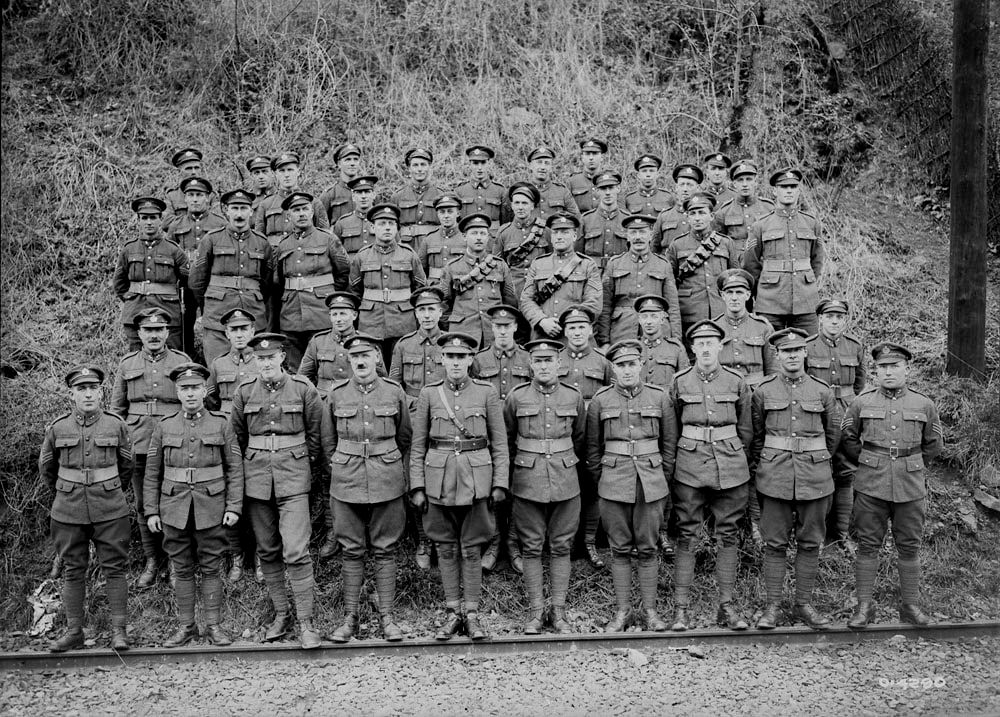 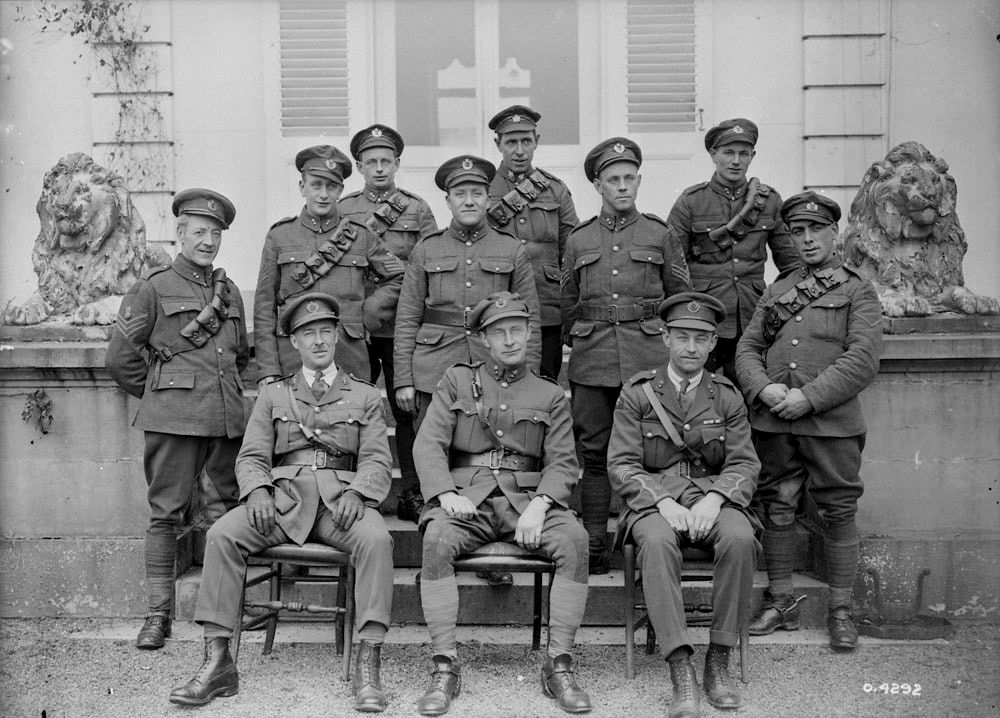 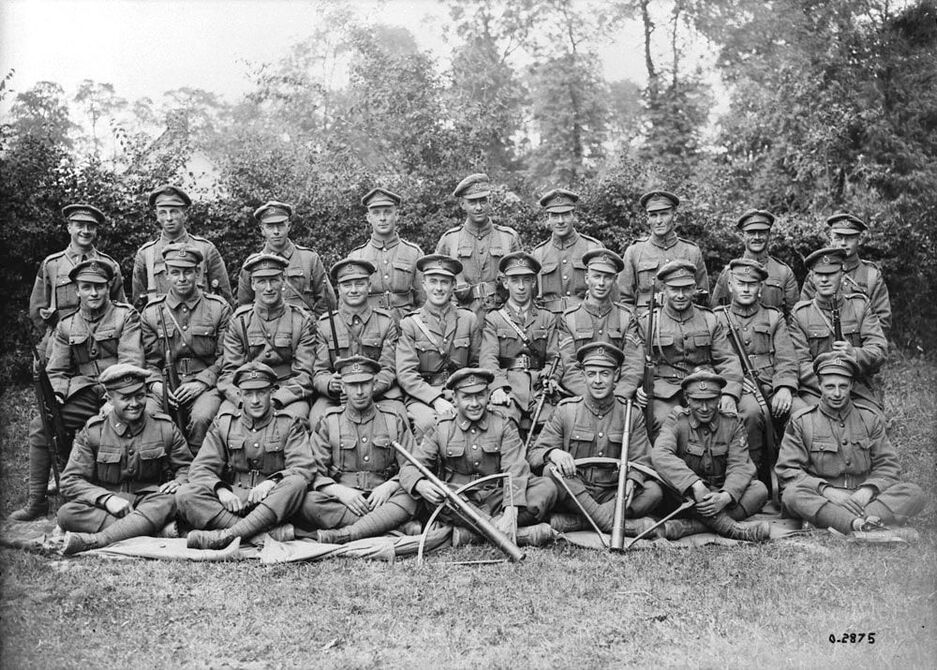 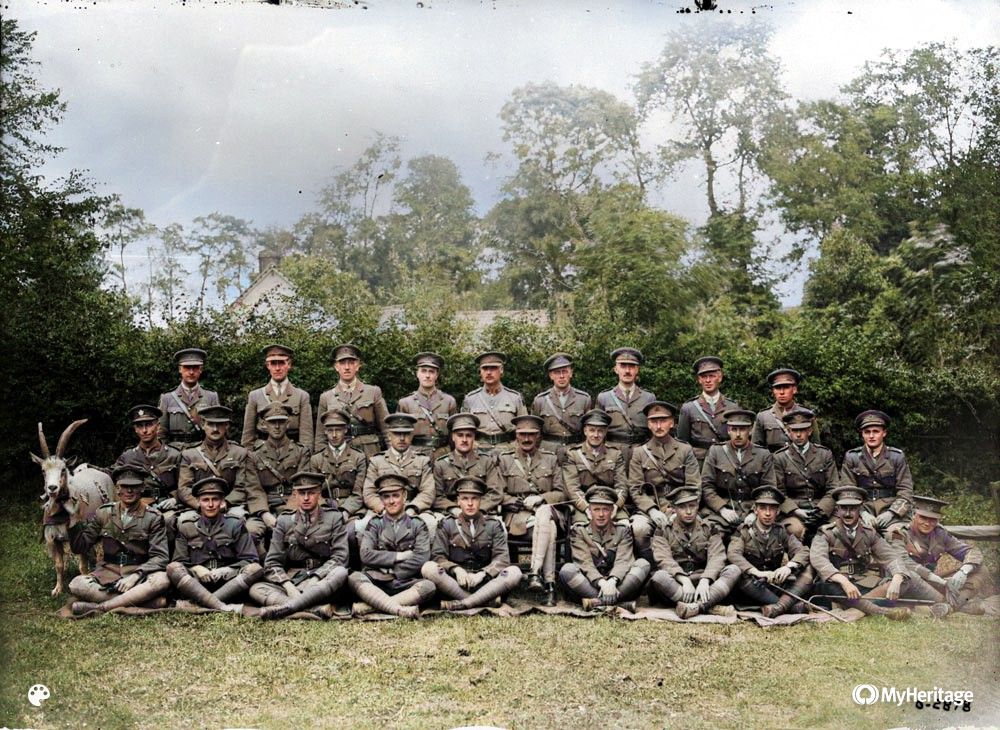 "Holding the Line" by Harold Baldwin 1918 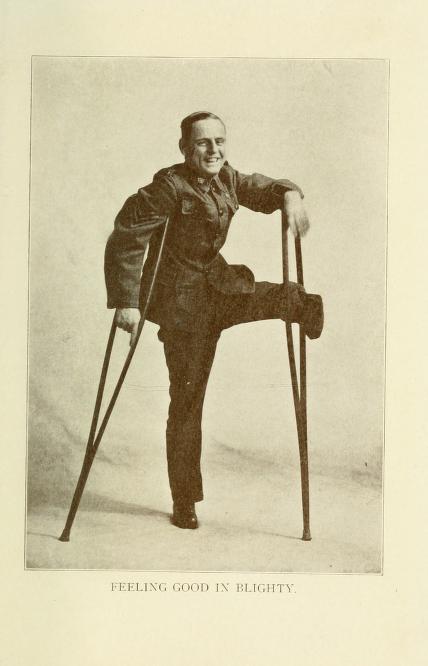 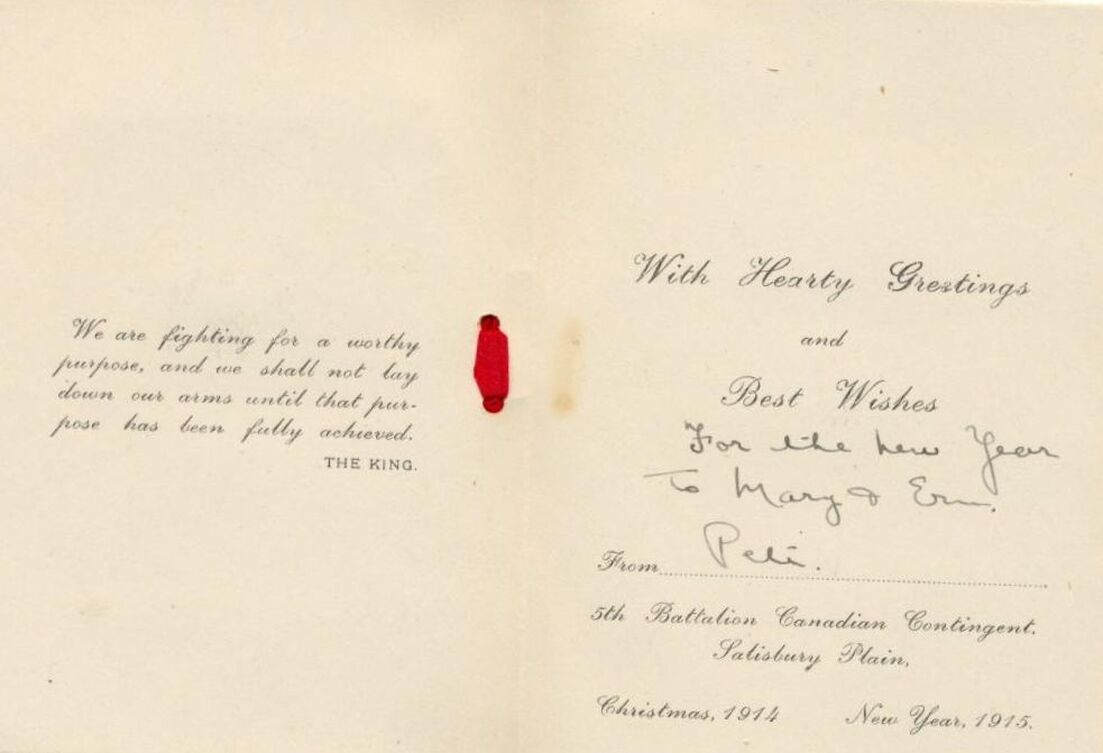